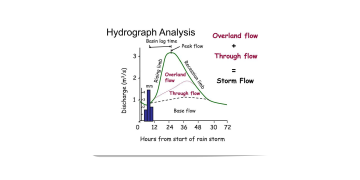 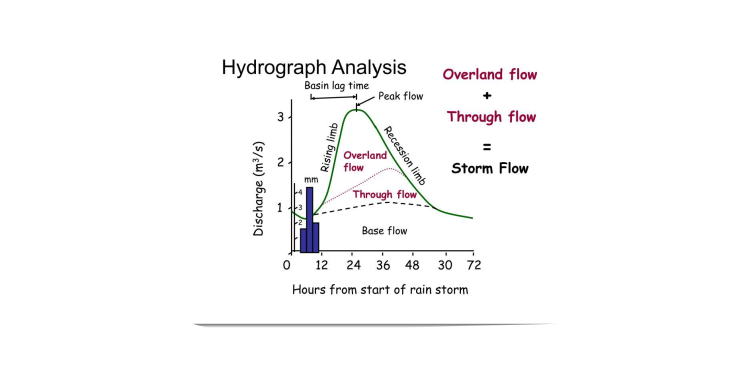 The theory of unit hydrograph is based on certain assumptions.

The main assumptions are following:

(i) The effective rainfall is uniformly distributed over the entire drainage basin.

(ii) The effective rainfall occurs uniformly within its specifier duration.

This requirement calls for selection of storms of so small a duration which would generally produce an intense and nearly uniform effective rainfall and would produce a well defined single peak of hydrograph of short time base. Such a storm can be termed as “unit storm”.

(iii) The effective rainfalls of equal (unit) duration will produce hydrographs of direct runoff having same or constant time base.

(iv) The ordinates of the direct runoff hydrographs having same time base (i.e., hydrographs due to effective rainfalls of different intensity but equal duration) are directly proportional to the total amount of direct runoff given by each hydrograph. This important assumption is called principle of linearity or proportionality or superposition.

When the area of the drainage basin exceeds a few thousand km2. The catchment has to be divided into sub-basins and the unit hydrographs developed for each sub-basin. The flood discharge at the basin outlet can then be estimated by combining the sub- basin floods adopting flood routing procedure.

(ii) The unit hydrograph method cannot be applied when appreciable portion of storm precipitation falls as snow because snow-melt runoff is governed mainly by temperature changes.

(iii) Also when snow covered area in the drainage basin is significant the unit hydrograph method becomes inapplicable. The reason is that the storm rainfall gets mixed up with the snow pack and may produce delayed runoff differently under different conditions of snow pack.

(iv) The physical basin characteristics change with seasons, man-made structures in the basin, conditions of flow etc. Obviously the principle of time invariance is really valid only when the time and condition of the drainage basin are specified.

(v) It is commonly seen that no two rain storms have same pattern in space and time. But it is not practicable to derive separate unit hydrograph for each possible time- intensity pattern. Therefore, in addition to limiting drainage basin area up to 5000 km2 if storms of shorter duration say 1/3 to 1/4 of peaking time are selected it is seen that the runoff patterns do not vary drastically.

(vi) The principle of linearity is also not completely valid. This is so because due to variability in proportion of surface, subsurface and groundwater runoff components during smaller and larger storms of same duration, the maximum ordinate (peak) of the unit hydrograph derived from smaller storm is smaller than the one derived from larger storm. Obviously the character and duration of recession limb which is a function of the peak flow will also be different. When appreciable non-linearity is seen to exist it is necessary to use derived unit hydrographs only for reconstructing events of similar magnitude.

The limitation to the theory of unit hydrograph can be overcome to a large extent by remaining within the various ranges and restrictions indicated above.

The unit hydrograph theory has several advantages to its credit which can be summarised as below:

(i) Flood hydrograph can be calculated with the help of very short record of data.

(iii) The unit hydrograph procedure can be computerised easily to facilitate calculations.