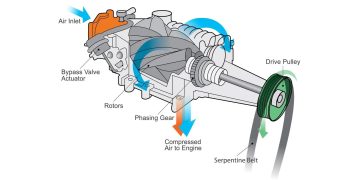 SUPERCHARGERS – sounds cool, right ? Well, it is. You might have come across it in NFS or other racing games if you are hardcore racing fan like me

. So what are superchargers, their types, advantages, how do they work ?
Lets know everything related to them today, right here, right now !

In simple words, Superchargers are pressure boosting devices(compressors) which increase the pressure of the air before letting it get into cylinder of the internal combustion engine !
And the process of increasing the pressure OR forcing more air to get into engine is called as supercharging.

Why do we need superchargers ?

Pressure goes on increasing during compression stroke & goes on decreasing during exhaust stroke. So average pressure is calculated with the help of these data.
More the MEP, more the efficiency of engine !
So if more air is forced & compressed into the cylinder, there will be an increase in the mean pressure & hence will produce more power ! This is why we need them – to force the air into engine! Hence they are also called forced induction systems.

Forcing more air into the engine basically means increasing the density of the air charge before entering into the cylinder. At high altitudes and hill stations, the density of air is much less and the engine under performs. Therefore, to compensate power loss of engines and vehicles at higher altitudes, superchargers are must.

Superchargers are basically compressors/blowers which takes air at normal ambient pressure & compresses it and forcefully pushes it into engine ! Power to the compressor/blower is transmitted from engine via the belt drive.
The addition of extra amount of air-fuel mixture into the cylinder increases the mean effective pressure of the engine. An increment in MEP makes the engine produce more power. In this way, adding a compressor to the engine makes it more efficient.

These are commonly used in the vehicles & are powered by the engine via a belt-pulley system. The air-fuel mixture enters the impeller at the centre. The air is then passed through diffuser, which increases the pressure. Finally the air makes it way through the volute casing to the engine.

Root’s type contain two rotors of epicycloid shape. The rotors are of equal size inter-meshed & are mounted and keyed on 2 different shafts. Any one shaft is powered by the engine via a V-belt or gear train(depending on the distance). Each rotor can have 2 or more than 2 lobes depending upon the requirement. The air enters through the inlet & gets trapped on its way to outlet. As a result, pressure at outlet would be greater than the inlet.

A number of vanes are mounted on the drum of the supercharger. These vanes are pushed outwards via pre-compressed springs. This arrangement helps the vane to stay in contact with the inner surface of the body.
Now due to eccentric rotation, the space between two vanes is more at the inlet & less at the oulet. In this way, the quantity of air which enters at the inlet decreases it’s volume on its way to oulet. A decrease in volume results in increment of pressure of air. Thus the mixture obtained at the outlet is at higher pressure than at the inlet.

Roots & Screw type supercharger have longer life and provide constant output. Centrifugal superchargers are generally suitable for low speeds. While in Vane type, the vane tips start wearing with time and need to be replaced.

Are there any other methods of supercharging ?

Yes. There are various other ways to force the air which doesn’t need extra power unlike compressors. The 2 most widely applied are –

Here, the inlet manifold is designed in such a way that the air gets automatically pushed into the cylinder. The air continuously tries into the cylinder but the intake valves open/close several times a second ! Every time the valve closes, the air just rams into it. This generates a pressure wave which travels in the opposite direction until it hits the plenum & gets reflected back.
Now if the resonant frequency of the plenum & engine matches, this pressure wave carries more air into the cylinder doing the work of a supercharger.

This type of method is generally adopted in large marine engines. It utilizes the bottom side of the piston for compressing the air. With proper timing of valves, this system gives an adequate supply of compressed air, as there are 2 delivery strokes to each suction stroke of each stroke !

Get more practical explanation of turbo charger at GATE Coaching