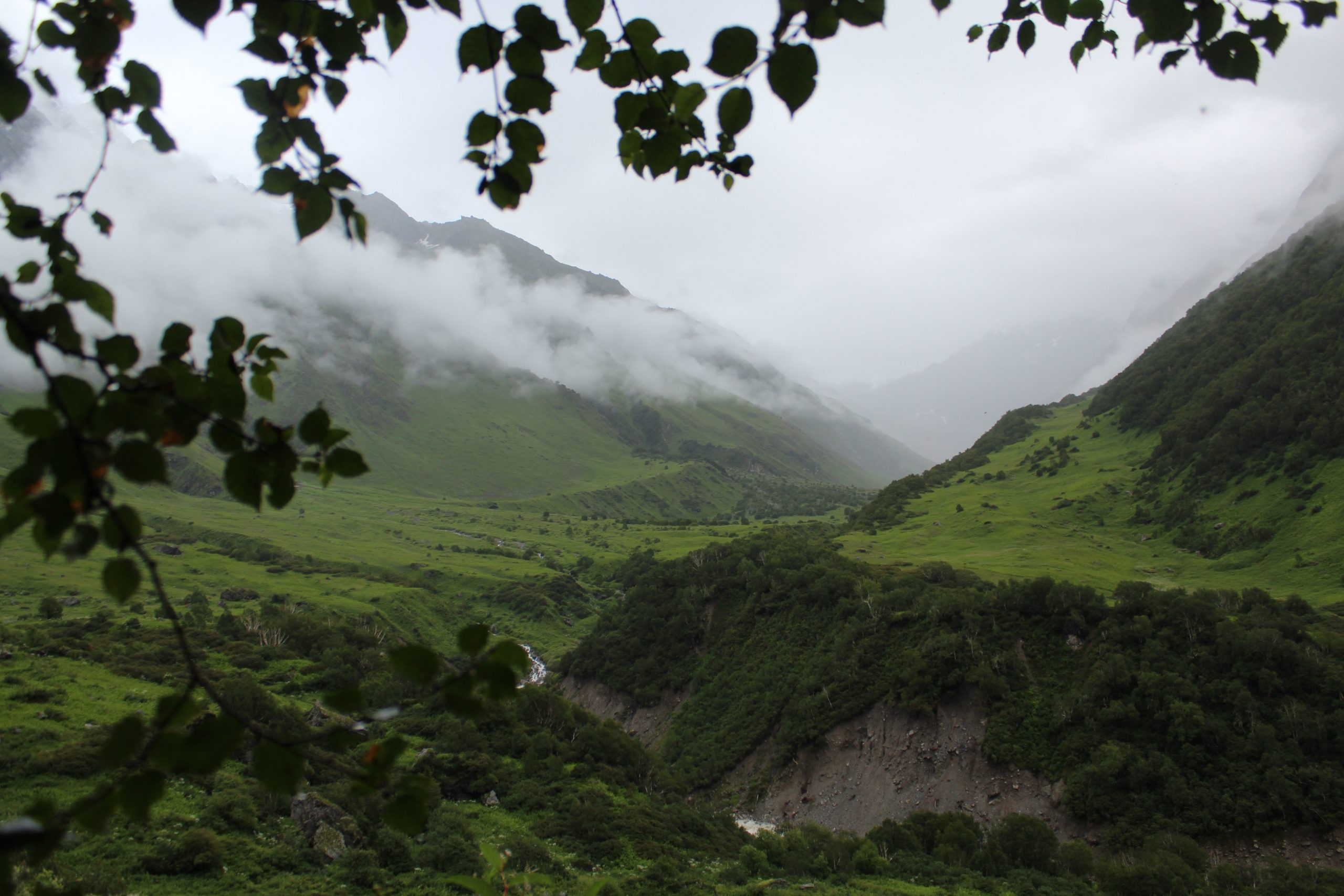 by moustachescapes
in Travel and Leisure
0

Valley of Flowers is a UNESCO World Heritage site and India’s largest natural botanical garden, located in the Nanda Devi Biosphere. The two neighbouring hikes, Valley of Flowers and Hemkund Sahib, conveniently located between Joshimath and Badrinath, are two of Uttarakhand’s most picturesque locations.

Every year from June to September, the valley bursts forth in a riot of colour. During this season, about 500 different species bloom and cover the valley.

In the Garhwal Himalayas, travel across the five sacred river confluences. In ascending order of their occurrence, Devprayag, Rudraprayag, Karnaprayag, Nandaprayag, and Vishnuprayag.

1. Devprayag is the meeting point of two sacred rivers: the Bhagirathi, the Ganges’ main stream, and the Alaknanda. On the journey to Badrinath, it is the first Prayag. The river is known as the Ganges beyond this point of confluence.

3. The Alaknanda River meets the Pindar River, which originates from the Pindar glacier below the Nanda Devi Mountain range, in Karn Prayag.

4. Nandaprayag is the point where the Mandakini River and the Alaknanda River meet.

The Gorsan Bugyal trek offers a close-up view of Mt. Nanda Devi, as well as other peaks including Mt. Chaukamba, Mt. Dronagiri, Hathi Parvat, Ghoda Parvat, and others. This walk is the ideal escape from the humdrum of daily life because of all of these factors. Landscapes will undoubtedly inspire you to pursue photography.

Valley of Flowers is a dynamic and beautiful national park that is well-known around the world today. This lovely spot is known for its attractive alpine flower meadows, diverse flora and wildlife, and breathtaking views of snow-capped summits. More than 300 flower species can be found at Valley of Flowers, including anemones, geraniums, marsh marigolds, primulas, asters, blue poppy, cobra Lily, bluebell, Brahma Kamal, and others. When the flowers in the valley bloom, the entire valley transforms into a flower bed, as if someone had painted the valley in bright colours.

There is also a river stream named Pushpavati that contributes to the breathtaking scenery that is unrivalled anywhere else on the planet. You can observe butterflies, birds, and, if you’re lucky, blue sheep, musk deer, black/brown bear, snow leopards, and a variety of other creatures and birds in addition to flowers.

Nobody liked the term “Valley of Flowers” before 1931, yet it does appear in the pages of the Hindu epic Ramayana. Lord Hanuman is said to have brought Sanjivani from this valley to resurrect Lord Lakshmana. Of course, the locals are aware of the valley, but they are hesitant to visit it due to some sort of superstition. This location was known as Nandan Kanan, which literally translates to “Lord Indra’s Garden.” However, Smythe popularises it by giving it a new name, which you are all familiar with: The Valley of Flowers.

The Indian government designated it as a national park in 1980, and it was renamed Nanda Devi National Park in 1982. It is located within the Nanda Devi Biosphere Reserve. It is now well-known for Nanda Devi and the Valley of Flowers National Park. In 2004, UNESCO made a significant step forward by designating it as a World Heritage Site.

The nearest train station to Valley of Flower is Rishikesh Railway Station, while the nearest airport is Dehradun JollyGrant Airport.

You can book a direct cab to Govindghat from any Transport Operator after you arrive in Haridwar/Rishikesh/Dehradun. This is a good choice for folks who dislike taking public transportation. If you prefer public transportation, you can take a direct GMOU bus or any shared taxi to Govidghat, which runs usually early in the morning. You can also catch the bus to Joshimath if you missed the direct bus to Govindghat. You may simply acquire local transport to Govindghat after you arrive in Joshimath.

Govindghat is the starting point for the hikes. To reach Ghanghriya on this day, you must hike around 14 kilometres. Depending on your trekking speed and expertise, it will take you about 4-5 hours to reach Ghanghriya. The trip is easy till you reach Bhundyar, but the following 3-4 kilometres are a little more difficult. As a result, prepare ahead and use the brakes at regular intervals.

After arriving in Ghanghirya, reserve a place to stay for the night. Ghangariya is the starting point for all tourists and Sikh pilgrims. This is where you can stay in simple, low-cost hotels with limited amenities. This area is prone to heavy snowfall in the winter, which is why it is closed from November to April. There are a few cheap hotels and guest houses with modest amenities, as well as a gurdwara, a helipad, and a few dhabas and tiny restaurants where you can sample the cuisine.

After spending the night in Ghanghriya, get up early the next morning, eat breakfast if desired, and begin your trip until 7-8 a.m. The journey is divided into two pathways a few hundred metres from the Ghanghriya, one for Hemkund Sahib Trek and the other for Valley of Flower Trek. After following the Valley of Flowers trail, you will come to an access gate to Valley, where you must fill out information and pay the entry fee before continuing your walk (don’t forget to bring your money and any identification cards). The distance from the entry gate to the Valley would be around 3-4 kilometres.

High mountains, chattering birds, humming bees, butterflies, and lush foliage can all be found in the Valley. You can sense the tranquilly of the location, and when the cool breeze strikes you, it delights you and invigorates you. After a few kilometres, you will notice another small bridge, and after crossing it, you will be greeted by a magnificent colourful valley with its flowers and powerful aroma that is wafting through the air. The brilliant sky, snow-capped mountains, and enormous glaciers contribute to the allure of this lovely photograph, turning it into a masterpiece. Because camping is not permitted in the valley, you must return to Ghangaria by 5 p.m.

Mid-June to Mid-August is Valley of Flowers season, or the greatest time to see the valley in flower. From June/July through September/October, the Valley is open to tourists for only three months. Snow begins to melt in June, and flowers begin to bloom. Some flower species only bloom for a limited amount of time. However, flowers can be seen in the Valley from July to August, with the first week of September being the best. The flower-bedded valley is not visible in September, but the lush green meadows are. The valley has its allure and beauty even without the bloom. During the winter, the Valley of Flowers receives a lot of snow, which is why it will be closed for the next 8 to 9 months.

Ghangaria serves as the starting point for all pilgrims and tourists. It provides a basic and affordable lodging alternative where you may relax and refuel your body. At a height of ten thousand feet, all hotels and guest homes are supplied with basic amenities, and you cannot anticipate luxurious amenities. To see the top Ghangaria Hotels in Ghangaria Uttarakhand, click here.