by Lockyourtrip
in Travel and Leisure
0 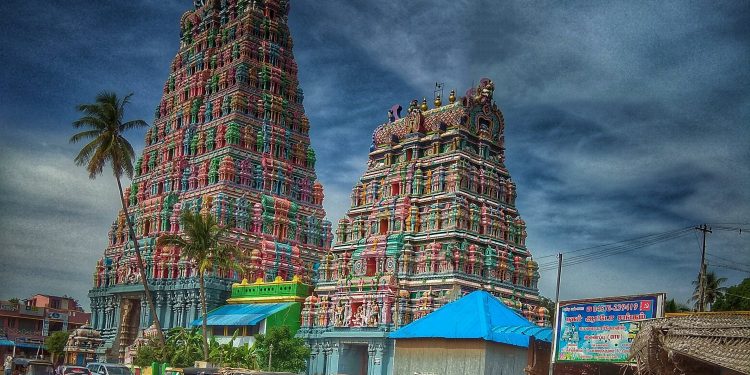 Tamil Nadu is well-known for its gorgeous temples, as well as for its intriguing cultures, rich history, and incredible architecture. Tamil Nadu is also well-known for its beautiful temples. These temples in Tamil Nadu are a bright reflection of India’s cultural legacy, and they contain some of the world’s most beautiful architectural creations, which transport you back in time to the Dravidian, Chola, and Pallava empires, among others. Lock Your Trip offers wide range of Tamil Nadu Tour Packages that will make your trip memorable.

Almost all of the temples in Tamil Nadu were constructed during the medieval period, contributing to the country’s rich cultural legacy. They provide an in-depth understanding of the sculptural and artistic abilities of sculptors working at the time. Furthermore, the lavish taste of the royal kings is reflected in the architecture of these temples.

Check out our selection of the 15 most prominent temples in Tamil Nadu, each of which will present you with a deeply spiritual encounter.

The Meenakshi Amman Temple, which is located in Madurai and is one of the most prominent Shiva temples in Tamil Nadu, was constructed during the era of the Nayaks. The temple, which is also known as the Meenakshi-Sundareshwar Temple, is dedicated to Goddess Parvati, who is represented by Meenakshi, and her spouse Lord Shiva, who is represented by Sundareshwar. This Shiva temple in Tamil Nadu is extremely important to both tourists and residents, and it is a significant component of the culture of South India as a whole. In particular, the Chithirai Festival, which is one of the most prominent festivals in Tamil Nadu, is held here with tremendous fanfare and ceremony. It commemorates the heavenly union of Meenakshi and Sundareswarar, and it draws a large number of worshipers to the temple.

This is one of the Bala Murugan temples in Siruvapuri, a city in Tamil Nadu. A different name for Lord Karthikeya is Murugan. He is the son of Lord Shiva and Goddess Parvati, and he is called Murugan. One of the temples is over 500 years old. Devotees come to it to have their wishes come true. As a result, a lot of people come to this Murugan temple in Tamil Nadu every day to worship Lord Karthikeya and make their wishes come true. It also has a monument to Lord Murugan and his wife, Devi Valli, who is displayed in marriage in the complex. People who want to get married go there. It is located in the state of Tamil Nadu and is included in many of the Tamil Nadu Honeymoon Packages.

There are nine temples in Tamil Nadu called Navagraha temples. Each one is called for a different one of the nine cosmic divinities. The Navapashanam Temple in Devipattinam, Tamil Nadu, is one of the most well-known Navagraha temples. This temple is important because worshipers can pray to all nine cosmic divinities at the same time. A Hindu pilgrimage site, along with the Ramanathaswamy Temple at Rameshwaram and the Adi Jagannatha Perumal Temple at Thiruppullani, is also a popular place to visit. Lord Ram, an avatar of Lord Vishnu, is thought to have built the holy sites of all the cosmic divinities at this temple in Tamil Nadu. Visit this beautiful temple with your Tamil Nadu Tour Package.

Kumbakonam Brahma Temple in the district of Thanjavur in the Indian state of Tamil Nadu is one of the most important places for Hindus to visit. The temple is mostly for Lord Vishnu, who is called Vedanarayana Perumal. It also has a statue of Brahma, who is on the right side of Lord Vishnu’s statue, with Goddesses Saraswati and Gayatri on the other side of the statue. There is Yoganarasimha on the left, with Bhoodevi and Sridevi on the right next to each other. For not being worshipped, Lord Brahma is said to be cursed, which makes the Brahma Temple in Tamil Nadu one of the few temples in India that honor him. Add a visit to this auspicious temple in your Tamil Nadu Trip Package.

One of the most important Shiva temples in Tamil Nadu is called Brihadeeswarar or Brihadisvara. It was built in the 11th century AD by the Chola Dynasty, which ruled at the time. Because it’s one of the Great Living Chola Temples in India, the temple is a UNESCO World Heritage Site. It is also one of the best-preserved Chola temples in India. The Vimana, which is 216 feet tall and weighs 80 tonnes, stands in the complex of the temple and draws tourists who want to learn about Indian architecture. People visit this temple every day because it is one of the most well-known in Tamil Nadu.

We can learn about Lord Brahma’s pride, which made him think he was more powerful than Shiva. Lord Shiva was so proud that he killed Lord Brahma’s fifth head and cursed him to lose all of his powers because of it. Lord Brahma realized that he had made a mistake, so he did a lot of punishment for Lord Shiva in a lot of places. It was called Brahma Theertham because it was next to the temple where he prayed to the Lord under a tree and took water for the rituals from the nearby tank. People call this place “Brahmapureeswarar” because Brahma prayed to God at this place.Add a visit to this auspicious temple in your Tamil Nadu Tour Package

We can learn about Lord Brahma’s pride, which made him think he was more powerful than Shiva. The mythological reference to this temple tells us this story. Lord Shiva was so proud that he killed Lord Brahma’s fifth head and cursed him to lose all of his powers because of this. When Lord Brahma realised what he had done, he did big puja for Lord Shiva in a lot of places. It was called Brahma Theertham because it was next to the temple where he prayed to the Lord and took water for his rituals from the nearby tank. People call this place “Brahmapureeswarar” because Brahma prayed to God at this spot.

A temple called Ramanathaswamy is one of the 12 Jyotirlinga temples. It is a holy place for Hindus to visit. It is thought that the Shiva Lingam at the temple was built and worshipped by Lord Ram before he crossed the bridge to Lanka. That is where the name Ramanathaswamy comes from. It was Lord Ram’s goal to ask his lord for forgiveness for the evil deeds he would do during the war with Ravana. He asked Hanuman to bring him a Lingam from the Himalayas, and he did. Lord Ram decided to make a Lingam out of sand because he was going to be late. The Lingam is in the sanctuary. It has a second lingam that was brought from Kailash. It is called Vishwalingam.

Akshay kumar is a travel enthusiast who loves to visit the most popular as well as offbeat places in the world. He loves to share her travel experiences with fellow travelers.