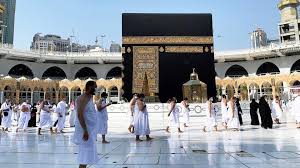 Saudi Arabia Opens Mecca To Vaccinated Pilgrims, After a Year of Closure

Saudi Arabia Opens Mecca To Vaccinated Pilgrims, After a Year of Closure

Saudi Arabia will begin to reopen its borders to vaccinated pilgrims visiting the holy city of Mecca for umrah, the Muslim pilgrimage, almost 18 months after closing them due to the coronavirus pandemic, the state press announced this September.

The authorities in charge of coordinating the foreign faithful began yesterday “to gradually receive pilgrimage requests from various countries of the world,” reported the Saudi Press Agency (SPA).

What to see in Mecca

Masjid al-Haram Mosque: Built in 1570, it is the largest mosque in the world and the first holy place in Islam.

Kaaba: Construction to see in Mecca of grayish granite stone in the shape of a cube and covered with fabrics that is in the center of the courtyard of the Masjid al-Haram Mosque and that represents “the house of God on Earth”. All Muslims direct their prayers towards her.

Well of about 35 m. deep covered by a dome that, according to legend, the Angel Gabriel opened to quench the thirst of Hagar and Ismael. All Muslims who make the Great Pilgrimage drink from its waters, considered curative and medicinal.

Refuge to see in Mecca in the mountains north of the city where it is believed that Muhammad received the first revelations from Allah through the Angel Gabriel.

Abraj Al-Bait: Gigantic group of buildings located in front of the Masjid al-Haram Mosque. They house a five-star hotel, an enormous shopping center, and a special place for prayer.

When to visit Mecca?

The city of Mecca, in the middle of the desert, has an extremely arid climate. In winter, temperatures are warm with little rainfall, while summers are extremely hot and dry, a time that is best avoided.

The Great Pilgrimage or Hajj takes place during the month of du-l-hiyya, the twelfth month of the Muslim calendar, which translates to varying dates each year on the Western Gregorian calendar.

It is essential to note that Mecca is a holy city for Muslims. The Saudi authorities strictly prohibited and monitored entry.

Sharia or Islamic law governs Mecca, faithfully applying Islamic precepts to everyday life. For this reason, drinking alcohol or consuming pork is strictly prohibited and punishable by fines and even jail.

Gastronomy
The gastronomy of Mecca is the same that predominates in many cities with a deeply rooted Muslim tradition, with dishes such as

How to get around Mecca

There are plans to build a metro network in Mecca with four lines starting in 2019, but currently there is only the Al Mashaaer Al Mugaddassah Metro Southern Line, which operates only 7 days a year, during the pilgrimage, connecting the holy places to see in Mecca such as Mount Arafat, Mina and Muzdalifah.

The company SAPTCO (Saudi Arabia Public Transportation Company) operates the bus lines that connect Mecca with some nearby cities, such as Jeddah or Medina.

Mount Arafat: Also known as the Mountain of Mercy, it is a granite hill located east of Mecca from where Muhammad gave his farewell sermon at the end of his life.

Mina: Desert valley about 5 km east of Mecca in which pilgrims temporarily set up their tents.

Jeddah Old Town: Declared a World Heritage Site by UNESCO in 2014, this historical complex to see in Mecca comprises traditional Arab buildings and narrow streets that are the perfect sample of the history and tradition of this region.

Khalid Ibn Al Waleed Street: Commercial street that goes to the Great Mosque of Jeddah. In it you can find many craft shops and restaurants.

If you are looking for Umrah packages 2022 Almuslim Travel offers the carefully designed and Umrah Packages 2021-2022 for the pilgrims departing from the United Kingdom. Being a trusted travel agency with over 40 years of experience, Almuslim Travel proudly commits to providing an exceptional and enriching traveling experience for the most spiritual enchantment “Hajj” & “Umrah“. We pride ourselves in offering cost-effective accommodation in proximity from Harams in Makkah and from Masjid-e- Nabvi in Madinah depending upon your choices of budgets and needs. Being a trusted source for umrah packages 2022, we take responsibility for all the arrangements and administrative tasks on our shoulders with no hesitation. You can now visit the holiest places in the world’s beautiful cities “Makkah” & “Madinah” with utmost peace of mind.

Foreign pilgrims wishing to travel to Mecca must be vaccinated, with one of the vaccines recognized by Saudi Arabia (Pfizer, AstraZeneca, Moderna, and Johnson & Johnson), and submit to quarantine rules, the agency added, citing the deputy minister, Abdulfattah bin Sulaiman Mashat.

Each month, up to two million pilgrims will perform umrah, previously reserved only for vaccinated residents of Saudi Arabia. The authorities are going to establish a list of allowed countries and are studying the measures to be implemented country by country, according to the SPA.

Of some of the main holy places of Islam, receives two types of pilgrimages: the umrah, which can be done of the year, and the hatch, which takes place once a year and usually attracts millions of people. people from all over the world.

The announcement of the resumption of umrah aroused the joy of the faithful. “I am relieved to resume umrah. Psychologically I need to go to Mecca, “33-year-old Egyptian commercial director Ahmed Hamada told AFP. However, the Egyptian engineer Mohammed Rajab, who lives in Australia, has shown his reservations, according to AFP. “There will be a lot of people, and the possibility of contagion will be high, even if the pilgrims are vaccinated,” he said in a message. Both will not be able to travel directly to Saudi Arabia due to the suspension of direct flights between Egypt and the Sunni kingdom, as well as the suspension of international flights in Australia.

The Covid-19 pandemic has profoundly altered both pilgrimages, which represent significant income for the oil kingdom. In normal times they usually leave about 12,000 million dollars (10,300 million euros) annually.

Last month we limited the hajj to 60,000 vaccinated Saudis and resident foreigners, a significant increase from the previous year when 10,000 attendees were registered. In 2020, only 5.8 million people performed umrah, a 69% decrease compared to 2019, according to official figures. The kingdom has recorded some 532,000 cases and more than 8,300 deaths from coronavirus.

However, it is important to note that Mecca is not a city open to general tourism, since, like the Saudi city of Medina, non-Muslim Western visitors are not allowed in. Therefore, if you want to visit the area and do not profess the religion of Islam, the major tourist attractions to see in Mecca can be found in the places around the city and in the neighboring city of Jeddah, which is much more open. to all types of tourism and with a great historical and cultural wealth.\

Selling a house: Four Things to Know Before Starting