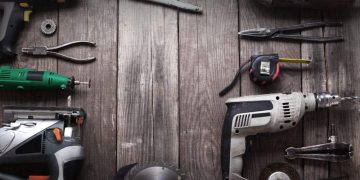 The global power tools market size is expected to grow from USD 34.9 billion in 2020 to USD 48.6 billion by 2027, at a CAGR of 4.8% from 2021 to 2027. Power tools are mechanical devices that work on different power sources, such as the battery, compressed air, or electricity. Other power tools include hydraulic presses, handheld machine drills, and gas tools, which are utilized for diverse applications, including assembly, production, and maintenance operations.

Factors such as growth in industrialization, an upsurge in housing spending, and a rise in urbanization are expected to cater to the development of the global power tools market. In addition, there has been an increase in demand for power tools in do-it-yourself (DIY) techniques amongst household users. The acceptance of DIY methods has led to market growth due to augmented demand for battery-operated power tools, modifications in consumer lifestyle, and an increase in the disposable income of people. Further, due to the innovative cordless battery technology, greater demand for lithium-ion batteries than nickel-cadmium batteries has garnered the adoption of cordless tools.

Drivers: Rapid industrialization coupled with an increase in infrastructural spending

Rising expenditure on infrastructure development, such as improvement of bridges, roads, and others. As stated by the Global Infrastructure Outlook, by 2040, the global population is estimated to grow by approximately two billion. The urban population will increase by 46%, triggering massive demand for infrastructure support.

An increase in urbanization has led to the expansion of the industrial sector throughout the globe, boosting the power tools market. Industrialization has increased due to development in transportation, high immigration, new inventions, and high investment, majorly in the Asia-Pacific region. Moreover, urbanization has resulted in increased construction activities, fueling the demand for cranes and other mining equipment, including hydraulic tools.

Although the electric power tools offer high productivity and efficient operations, the technologies employed during manufacturing augment their initial prices. Also, the pneumatic power tools have been in the end-use market for a long time and have achieved popularity in terms of their lower prices and performance. For instance, a DeWALT 20V Cordless 1/2-inch Impact Wrench Kit and a battery socket kit cost around $219.0 on online retail platforms. However, a DeWALT ½-inch Impact Wrench for heavy-duty operations costs only $140.0 on the same platform. This highlights the price difference between electric and pneumatic power tools, which hampers the adoption of electric power tools, thereby restraining its market growth.

The rising penetration of automation technologies worldwide has made it possible to track the tool productivities from remote platforms such as computer software, mobile application platforms, and others. The automation technologies primarily include inventory management solutions to conserve monetary expenses and time caused by mismanagement of tools operations. The major tool manufacturers have already adopted these technologies to improve the tool performance. For instance, Robert Bosch GmbH, based in Germany, offers BOSCH Toolbox App for its Bosch Power Tools. The app provides features such as project documentation, conversion tools, tracking of Bosch tools, service locators, and others.

In addition, through its brand DeWALT, Stanley Black & Decker offers a Tool Connect Inventory management solution. It features a connection between the mobile application and the power tool through Wi-Fi, and the data collected can be transferred to an inventory management portal. It allows tracking tools, equipment, and materials on multiple job sites from one central location.

Scope of the Report

The Global Power Tools Market, by Mode of Operation

Based on the mode of operation, the power tools market has been segmented into electric, pneumatic, and others. The power tools segment accounted for the largest share of 68.3% of the global power tools market in 2020. Electric power tools are widely used in the professional and consumer markets. Companies have launched electric power tools, which are easy to handle and smooth by function. For instance, in January 2018, Apex Tool Group extended its product offerings that include tightening solutions and assembly systems worldwide across numerous industries such as aerospace and automotive through its brand Cleco. Further, major vendors have introduced affordable, compact, small, and energy-efficient electric tools to reach a broader customer base.

Asia Pacific accounts for the highest CAGR during the forecast period in the power tools market.

China holds the major share of the power tools market in terms of consumption and manufacturing. However, developing countries such as India, Singapore, Hong Kong, Taiwan, and others have been recognized as important markets, owing to rapid technological growth. The major players are striving to develop manufacturing units in these markets to improve the production quantities and serve the Asian industries, including construction, automobile, consumer goods, and others. Furthermore, the improving lifestyles and per capita incomes in the Asian countries create opportunities for the home improvement and DIY market, thereby increasing the demand for power tools for DIY applications. According to the report published in 2018 by the Overseas Development Institute (ODI) based in London, the Asian regional economy grew by 6% in 2017 and is projected to grow significantly until 2025. This influences the overall growth of construction and manufacturing facilities in these regions. Thus, the improvement in overall production facilities is expected to create opportunities for the growth of the power tools market in this region.