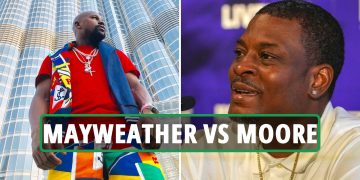 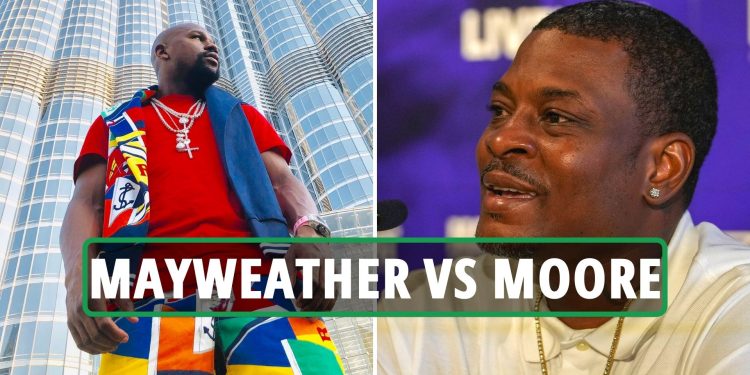 When Is the Mayweather vs. Moore Fight? Date, Time, Location

The Mayweather vs. Moore fight is happening on May 21 at the Etihad Arena in Abu Dhabi. The fight was initially scheduled for May 14, but, due to the death of United Arab Emirates President Sheikh Khalifa bin Zayed Al Nahyan, the event was rescheduled to this weekend.

If you were hoping to get tickets to the Mayweather vs. More fight, you’re (probably) out of luck: Only 20 people will be lucky enough to watch the event in person, with tickets being sold as NFTs for a whopping $187,000 each.

How to Watch Mayweather vs. Moore Online

The Mayweather vs. Moore PPV stream costs $29.99 on FITE, getting you live access to the boxing match in Abu Dhabi, plus unlimited replays after the exhibition event. Buy the PPV stream on FITE.tv here.

How to Watch Mayweather vs. Moore Online Free

Like most exhibition bouts, the Mayweather vs. Moore fight is more about the spectacle than the results. Though less well-known than Mayweather, Moore’s professional career is nothing to scoff at: Like Mayweather, More boasts an undefeated record of 18-0-1 (including 12 knock-outs), with a career that lasted from 1999 to 2016.

Moore and Mayweather also have a history together, as the two used to be sparring partners and Moore was even trained by Mayweather’s uncle, Roger Mayweather. Moore is undoubtedly very familiar with Mayweather’s style — and is likely training harder than Mayweather (the latter admitted to a lax training regimen before the Logan Paul bout) — so there is a chance that Moore could do some damage. Still, most are predicting a win for Mayweather.

Luckily, there are some other great fights on the Mayweather vs. Moore undercard, including a standout fight between UFC champion Anderson Silva and Bruno Machado. Anderson “The Spider” Silva returned to boxing after leaving the UFC in 2020, recently defeating Julio Cesar Chavez Jr. and Tito Ortiz.

The Mayweather vs. Moore undercard will also see Delfine Persoon vs. Elhem Mekhaled and Badou Jack vs. Hany Atiyo — both of which should be exciting bouts.

To watch the Mayweather vs. Moore fight live, as well as all the undercard matches, be sure to buy the PPV stream on FITE.tv this Saturday