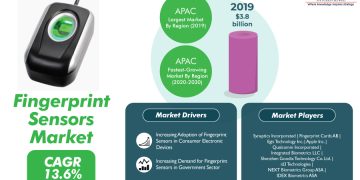 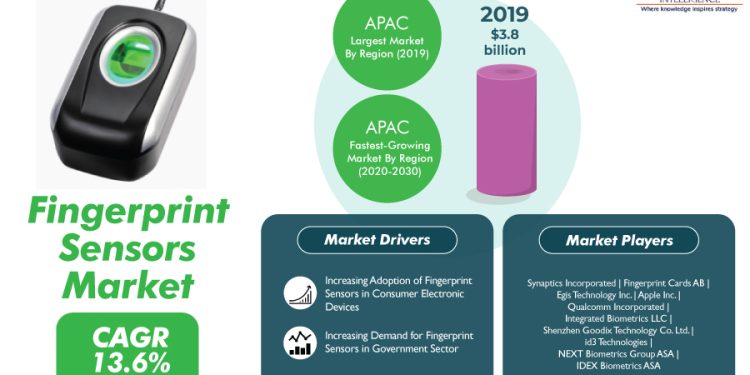 The key factors responsible for the growth of the fingerprint sensors market are the increasing installation rate of such instruments in consumer electronic devices and their rising demand in the government sector. Due to these reasons, the market revenue, which was $3.8 billion in 2019, is predicted to witness a 13.6% CAGR during 2020–2030 (forecast period). Since every person has a unique set of fingerprints, a fact known since at least the 6th century BC, they are an effective tool to establish and confirm someone’s identity.

Capacitive, ultrasonic, optical, thermal, and others are the categories under the technology segment. Among these, the capacitive category held the largest share during 2014–2019 (historical period) on account of the easy installation and high convenience and security advantages of sensors that work on this technology. The fastest growth will be witnessed by the ultrasonic category during the forecast period due to the high accuracy of this technology while mapping dry, wet, and dirty fingers.

Under the vertical segment, the fingerprint sensors market is divided into consumer electronics, government, banking, financial services, and insurance (BFSI), hospitality and healthcare, commercial offices/buildings, and others. In 2019, the market was dominated by the government division because of the rising usage of such sensors for the distribution of public services. Additionally, proofs of identity, such as driver’s license, voter’s ID card, and medical insurance cards, are being integrated with microchips containing the digital data of people’s fingerprints.

Presently, the biggest fingerprint sensors market trend is in-display sensors, which are being increasingly used in smartphones. Consumer electronics companies are taking such measures to reduce the bezel size and make the screens bigger, which also gives the devices a modern and sleek look. Thus, with the burgeoning sales of smartphones around the world, especially in developing countries, the competition in this industry is increasing. Thus, to gain an edge over their competitors and distinguish their products from others’, companies are integrating in-display sensors and other unique features.