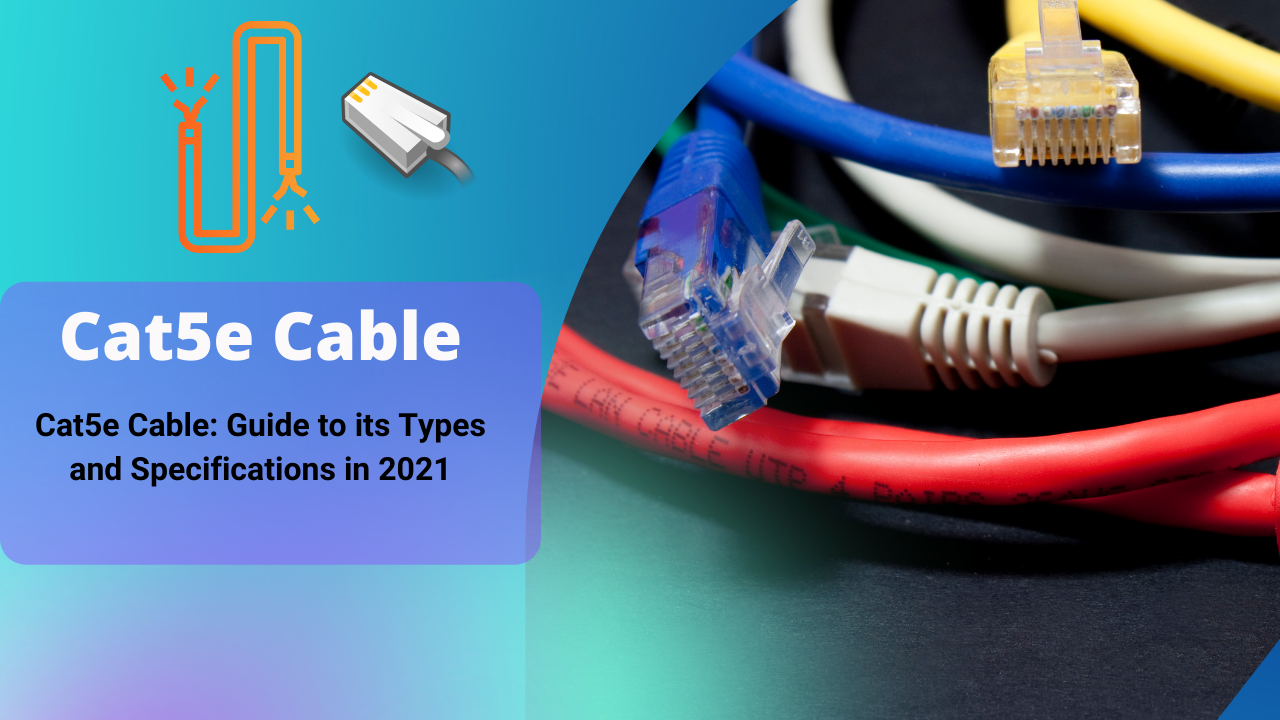 Cat5e Cable: Guide to its Types and Specifications in 2021

Cat5e Cable: Guide to its Types and Specifications in 2021

by smartechcables
in Computers and Technology
0

Cat5e Ethernet Cable — be it Cat5e Riser Cable, Cat5e Plenum Bare Copper, or Cat5e PVC Cable is one of the most widely used ethernet cables. If you are mulling over buying Cat5e ethernet cable, read this updated guide to make an informed decision.

As a technology that has been around for a while, Cat5e Ethernet cable is now used as an alternative to fiber optic cables. This type of cable provides data transmission speeds of up to 1 gigabit per second, which makes it relatively slow when compared with other newer technologies such as Cat6 or Cat7 cables. However, its significantly lower price means it’s still a good choice for buyers on a budget.

We know that a standard Ethernet connection uses a cable called Cat5e, but what exactly does the “5e” stand for? Cat stands for “category”, and a category 5 cable is a type of cabling standardized by the Institute of Electrical and Electronics Engineers (IEEE) in 1995. The 5e designation specifies that it is an enhanced version of copper-based Category 5 cable, which was designed to meet the needs of 10BASE-T networks.

The “Cat” in the Cat5e stands for the category, “e” stands for enhanced, and 5 represents its generation. In nutshell, Cat5e is an enhanced 5th generation cable. This cable supersedes Cat5 ethernet cable.

The inner structure comprises 8 conductors that are tightly bundled together in 4 twisted pairs. These twisted pairs reduce the effects of crosstalk and also cancel electromagnetic interference.

The conductors are the most important part of any ethernet cable as they transfer signals from one device to another and also connect devices to the internet network. They come in 2 different materials:

A Cat5e ethernet cable comes in the following 3 types:

Let’s discuss each one of them in detail.

You can identify a Cat5e Plenum Bare Copper cable from CMP-rated marking on its outer jacket. The CMP is the highest rating for jackets of the ethernet cables. As these cables are fire retardant and UV resistant, you will run them in the plenum or horizontal spaces of the buildings.

Cat5e Plenum cables are used to increase the transmission speed and reduce the attenuation of signals. They also prevent interference from outside sources and help eliminate cross-talk. The construction of the cable consists of four twisted pairs of 24 AWG (American Wire Gauge) copper wire. The process is completed by adding an overall jacket and a PVC (Polyvinyl Chloride) layer for flame propagation resistance.

A Cat5e Riser Cable comes with a CMR-rated jacket. This is the second-best rating for jackets of the ethernet cable. These cables are also fire resistant and UV resistant. You will buy a CMR-rated or riser-rated ethernet cable if you want to run one in the vertical or riser spaces of the buildings. Though riser-rated cables are also made from supreme quality polyvinyl chloride the same is not as fine as that of plenum-rated cables.

Cat5e Riser Cable Usage is an inexpensive way to extend your networking devices. Cat5e Riser Cables are really good for small networks that are close together. A cat5e riser cable is a network cable that has a connector on one end that plugs into the wall or floor outlet and another connector on the other end. You can use these cables for many purposes, but they are mainly used to extend the distance of the network device.

A Cat5e PVC Cable is made from low-quality polyvinyl chloride. You will buy a PVC cable if you need to run one in the outdoor spaces. This cable has some salient features such as the jacket is chemical resistant and sunlight resistant.

There are many different types of cables, but none can compare to cat5e PVC cable. Cat5e PVC cable has the fastest download and upload speeds, with speeds up to 1000 Mb/s. It also features a lower cost than other types of cables. The only downside to this type of cable is that it can’t carry power, which is why it must always be run alongside another type of wire – such as power or coaxial.

Two factors that heavily influence the performance of Cat5e cable in a negative manner are none other than EMI and crosstalk. To provide protection against the same, manufacturers add an extra layer or layers of protection in the form of a foil sheet.

This sheet is either wrapped around all 4 twisted pairs combined or over each twisted pair separately. Such cables that have extra protection against crosstalk and EMI are called STP (shielded twisted pairs) cables. You will buy an STP cable if you need to run it in harsh environments – spaces where EMI and crosstalk are excessive.

Unshielded Twisted Pair (UTP) cables, as the name suggests, do not have any extra layer of protection. STP cables are much more expensive than their UTP counterparts. You will buy a UTP Cat5e Plenum Bare Copper or Cat5e Riser Cable if you need to run it in spaces where crosstalk and EMI are non-existent.

As previously stated, the cable exhibits a data transfer speed of 1Gbps over a distance of 328 feet (100 meters), indicating that it is capable of transmitting data at a high rate. Despite the fact that the TIA/EIA standards for bandwidth capacities are 100MHz, some manufacturers offer bandwidth capacities of 350MHz or higher.

Because of the thick coating material used on the cable, it provides excellent protection against crosstalk and EMI. Even in temperatures as low as -25 degrees Celsius and as high as 120 degrees Celsius, it continues to operate without a hitch. It is available in gauges ranging from 22 AWG to 26AWG. It complies with the following industry requirements:

The fact that it is a bulk product means that it comes in a convenient pull box and can be installed in temperatures ranging from 0 degrees to 60 degrees. The cable has a fire retardant coating on one side and is UV resistant on the other. The cable is compatible with all currently available applications. A Cat5e Cable has 3 variants: Cat5e Plenum Bare Copper, Cat5e Riser Cable, and Cat5e PVC cable.