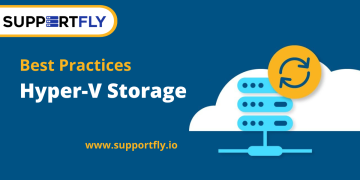 by supportfly
in Business, Services
0 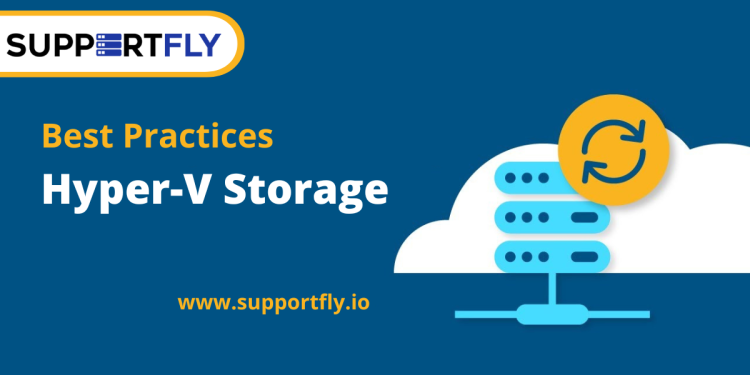 Server storage plays an important role in virtualization servers that have a hypervisor installed and run virtual machines. As well as causing high or low performance, storage can also ensure high or low reliability of VM data and virtual disks. Before configuring a server or deploying virtual machines, administrators should choose the right type of storage for Hyper-V server management. We will explore different types of storage options in this blog post so that you can make a storage selection that is best suited for your environment and meets your requirements effectively.

Contents hide
1 Hyper-V Storage Recommendations
1.1 Use RAID 1 or RAID 10
1.2 Difference Between RAID 5 & RAID 6
1.3 Make Use of High-Speed Storage
1.4 Make Use of a Dedicated Volume to Store VMs
1.5 Store VM Files In One Location
1.6 Leave Space for BIN (VMRS) Files
1.7 Which File System to Use: NTFS or ReFS?
1.8 Use a High-Speed Hyper-V Storage Network
1.9 Which Virtual Disk Type to Prefer – VHD or VHDX?
1.10 Monitoring Disk Health and Performance
1.10.1 Conclusion

A Hyper-V server can mount local or remote storage.

Local storage comprises several disks connected to the server locally. Usually, RAID controllers inside servers are connected to such disks via SAS (Serial Attached SCSI) interfaces. It is recommended to use SAS disks over SATA disks (despite the compatibility – SATA disks can be connected to SAS ports, but not vice versa) because of SAS disks’ superior reliability. It is possible to save money by storing locally rather than remotely. A Hyper-V cluster does not need to be deployed if you plan to use local storage.

Remote storage is connected to a Hyper-V server using iSCSI, Fibre Channel, or SMB 3.0 protocols. SMB 3.0 provides file-level storage as opposed to fibre channel or iSCSI which provides block-level storage. To connect servers to storage such as SANs (Storage Area Networks), Fiber Channel requires a unique physical interface. Ethernet networks can be connected to storage via FCoE (Fibre Channel over Ethernet). SANs and NAS (Network Attached Storage) can be connected using the iSCSI protocol. NAS devices resemble mini servers that have RAID controllers and disk drive slots inside as well as several ports for connecting to networks. Standalone servers can also serve as NAS devices. Redundancy can improve the reliability of data with SANs and NASs.

It is mandatory to use remote storage when deploying a Failover Cluster. This type of storage is known as shared storage.

RAID 0 is a non-redundant method of striping disks. Failure of one disk leads to failure of the entire array – there is no fault tolerance. RAIDs of this type require a minimum of two disks.

RAID 1 is redundant. A disk is mirrored onto another disk, thereby achieving 100% redundancy. It is possible to rebuild the array if one of the disks fails. Rebuilding an array is likely to be successful. It is possible to use RAID 1 for failover storage. This type of RAID requires at least two disks.

RAID 10 consists of a combination of a RAID 0 and a RAID 1. As a result, a fault-tolerant array with higher performance is created using the advantages of both array types. It is combined into a stripe by mirroring the disks. This type of RAID requires at least four disks. Using RAID 10 with four disks, any single disk failure will not affect the data. Moreover, the four-disk array can survive the failure of two disks from different mirrors.

RAID 6 uses double parity for striping. In this case, parity information is stored on two disks rather than just one, similar to RAID 5. Up to two disks can fail without affecting RAID 6. This type of RAID requires at least four disks.

When it comes to RAID 5 and RAID 6, they seem attractive at first, but let’s examine them carefully. When disk capacity was small, RAID 5 was developed dozens of years ago. Since hard disk capacity grows faster than speed, rebuilding RAID 5 takes a long time if one disk fails. As a RAID 5 server uses storage intensively to perform regular tasks, each disk’s workload increases significantly during a rebuild. RAID 5 disks may contain rarely used data, and you cannot guarantee that this data can be read. Errors are more likely to occur as a result. An array rebuild error may lead to the failure of the entire array. RAID 5 works like RAID 0 when one disk fails.

Compared to RAID 5, RAID 6 has twice as much parity data for recovery. So, the probability of surviving a disk failure and rebuilding successfully is higher. Another issue with RAID 6 is that its performance is the least of those of RAID 10 and RAID 5. Rebuilds are especially prone to performance issues.

In Hyper-V storage, RAID 1 and RAID 10 provide the greatest level of reliability. Both physical servers and NAS devices can support hardware RAID.

Make Use of High-Speed Storage

Performance of storage input/output is important for VM performance. To store the VMs, you should use the fastest hard disk drives (HDDs). Modern hard disks offer high performance for an affordable price per Gigabyte, with a wide assortment of performance characteristics. You can use a Solid State Drive (SSD) if a hard disk drive is insufficient for your VMs. SSDs do not have moving parts, so they are faster than spinning HDDs, but they are more expensive. An SSD usually costs more per Gigabyte and has a smaller overall capacity than an HDD. With high-performance Hyper-V disks, VMs can work without lag.

Make Use of a Dedicated Volume to Store VMs

Store VM Files In One Location

Hyper-V virtual machines consist of VHDX (VHD) files – virtual disks, AVHDX files – differencing virtual disks, VMCX files – configuration files, and VMRS files – runtime state files. Administrators may not find it convenient to store VM files in a variety of default locations. Make sure all files belonging to the current VM are stored in a single directory. This screenshot shows the subdirectories of one directory that is named Server2016-01 where all the files for the VM named Server2016-01 are located.

The memory state of BIN files is stored on a disk and consumes disk space. On the volumes where the VM files are stored, there should be a reserved space. VMRS is the new extension for this file type since Hyper-V 2016. VHDX files consume the most disk space after this file type. Virtual memory is equal to the size of a BIN (VMRS) file. You should reserve at least 38 GB of storage for a VM with a 30GB virtual disk and 8GB virtual memory. If BIN (VMRS) files are equal to the provisioned memory amount for a dynamic virtual machine at the time of creation.

Which File System to Use: NTFS or ReFS?

ReFS is one of the most important file systems for servers because it has a long list of advantages and is designed to meet the server’s storage requirements more efficiently. As well as advantages, there are also disadvantages:

Last but not least, the administrator decides which file system to use. When Hyper-V storage is not a concern, ReFS can be used.

Use a High-Speed Hyper-V Storage Network

Which Virtual Disk Type to Prefer – VHD or VHDX?

Maintaining disk health regularly can prevent data corruption due to possible disk damage. Monitor data from disk drives, including disks that belong to RAID, using S.M.A.R.T. (Self-Monitoring, Analysis, and Reporting Technology) utilities. Your data is more likely to be safe if you identify a disk problem early. Monitoring disk performance will also help identify which disks are overloaded. To optimize performance, you can redistribute disk-intensive VMs between other storage to optimize their performance.

In most IT companies, storage is essential because the data it contains is of utmost importance. As we discussed in today’s blog post, optimizing Hyper-V’s storage performance and ensuring high reliability of storage can be achieved by following the best storage practices. Choose the recommendations that suit your environment from all those listed above. Back up your Hyper-V VM data even if your storage is top-of-the-line. With Supportfly, you can efficiently backup Hyper-V VMs.