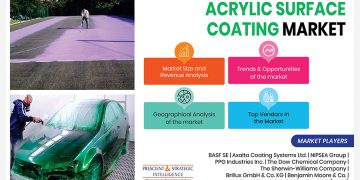 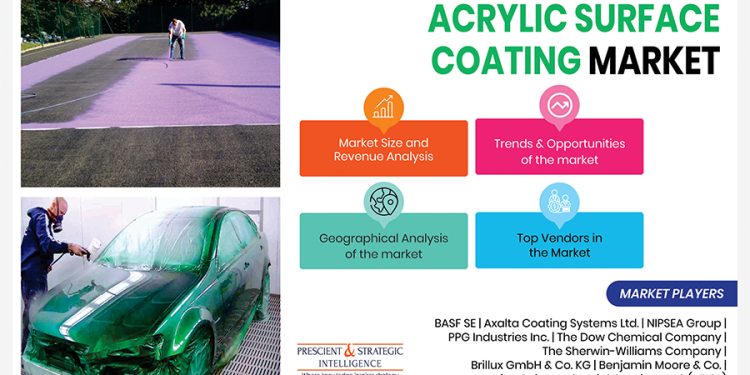 Because of the rapidly growing construction activities, on account of the rising economic growth, industrialization, and urbanization, the global paint and coating industry is also predicted to register significant growth in the near future.Paints and coatings are utilized extensively in construction as well as several other industries for both functional and decorative purposes. Attributed to these reasons, the demand for acrylic surface coating is also growing considerably.

Among these, the largest demand in the near future is projected to be created for waterborne acrylic surface coatings. This is ascribed to the rising environmental concerns which have resulted in the formulation of strict environmental regulations. Owing to this, there is a high demand for coatings which contain low levels of volatile organic compounds (VOC), as these compounds cause respiratory illnesses and cancer. Therefore, the governments of different countries are focusing on implementing laws regarding lowering the VOC emission levels, which is further compelling manufacturers to produce coatings which are environment friendly. Since waterborne coatings reduce the VOC emissions, they are widely being used in different industries.

In the coming years, the Asia-Pacific region is expected to emerge as the largest acrylic surface coating market instead of North America, which is due to the growing investments for the development of infrastructure, rising adoption of eco-friendly coatings, expanding automotive industry, and increasing spending power in the region. The demand for these coatings in China is projected to grow significantly, as the country is the world’s leading automotive industry. Apart from this, countries in Latin America and Eastern Europe are also predicted to make considerable use of acrylic surface coatings in the near future.

In conclusion, the expanding paints and coatings and construction industries are leading to a rising requirement for acrylic surface coatings.