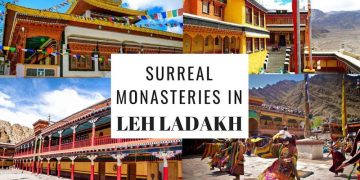 10 Beautiful Temples In Leh To gain Peace And Happiness

10 Beautiful Temples In Leh To gain Peace And Happiness

by Akshaykumar
in Travel and Leisure
0 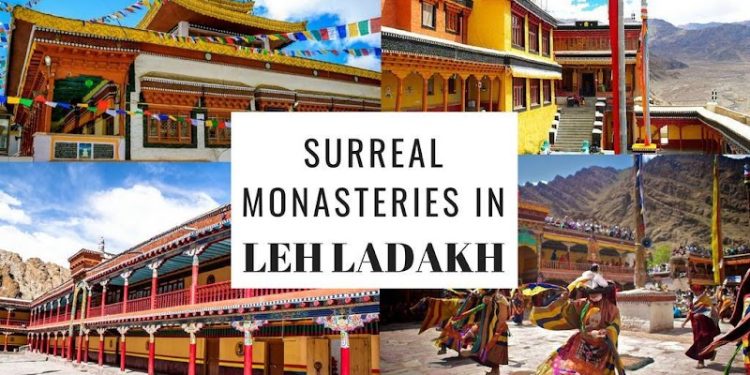 Everyone is aware of the numerous Buddhist temples in Ladakh, but few are aware that there are also several Hindu temples. The Tibetan influence may be found in the cuisines, customs, festivals, and places of worship. On the other side, as a part of India, Ladakh is home to a number of Hindu temples. If you wish to visit one of these temples in Leh during your stay in this magnificent area, just book any of the Leh Nubra Pangong tour packages offered by Lock Your Trip. In this blog, we have compiled a list of temples in Leh that may be visited. They are simple, easy to visit and provide visitors with a sense of calm. So, plan a visit to these beautiful Hindu and Buddhist temples in Leh Ladakh.

It is not a single temple, but rather a collection of temples that form a larger complex. It was founded by Rinchen Sangpo and is one of the oldest Buddhist temples in Leh Ladakh. The temple is in the Leh Ladakh area of Alchi. You may witness images of Bodhisattva, Gandharva, Buddha, and Apsara when visiting this temple. This temple also includes Buddhist artefacts dating back to the 10th century. And this is the only site in the country where you may do so. The temple also exhibits artworks produced by Buddhist artisans. Lotsawa Lhakhang, Lhakhang Soma, Sumstek, Vairocana temple, Manjushree Lhakhang, and Kangyur temple are among the six temples in the complex that may be visited.

Paldan Lumo Temple is situated on a top of a mountain near the Indus River. It is among the temples at a high altitude that offers a wonderful view of the neighbourhood. The temple is built within the Spituk Monastery complex. It is roughly 7 kilometres from the city of Leh. This is a significant temple in Ladakh dedicated to Vajrabhairava. Every January, the temple celebrates a feast during which the monks reveal the Lord’s face. The temple houses a variety of items, including strange-looking pictures, Tantrik worship, arms, and antiques. In the temple, there is also a shield made from a cane.

The Red Maitreya Temple is located in the city of Leh. It is one of the most well-known temples in Leh Ladakh and receives a large number of visitors each year. The massive Maitreya Buddha statue is the temple’s major draw, and visitors enjoy exploring the wall hangings throughout the property. Tragspa Bumde created the temple, which is one of the greatest destinations to visit if you want to learn about Ladakh’s religious history. The temple was damaged during the Dogra invasion, but Anca Nicolaescu rebuilt it in the 1950s.

Lamokhang Temple, one of the greatest monasteries in Leh, is a popular tourist destination in Ladakh. It is located on the Leh Manali Highway in the Thiksey area of Ladakh. This temple sits on the top of the famous Thiksey Monastery. Tengyur and Kangyur writings are also housed in Lamokhang Temple. Only men are permitted to enter this shrine, but women may worship from a distance. Other noteworthy features include large stupas, Mani Walls, and temple pillars imprinted with Buddha’s teachings.

Tara Temple is one of the most well-known temples in Leh Ladakh. The temple is also part of the Thiksey monastery, which is devoted to the Goddess Tara. The goddess is represented by 21 images in the temple. The temple courtyard is allotted to other holy creatures. Tsong Khapa, Buddha, Mahakal, Padmasambhava, and Palden Lhamo are shown on the temple’s wall painting.

The Vajra Bhairav Temple is located in the Indus River Valley in the Spituk area of Leh Ladakh. The temple is one of Leh Ladakh’s most famous Hindu temples. The Vajra Bhairav Shrine is around 10 kilometres from Leh. This Gelugpa temple is one of the most popular Shiv Mandirs in Ladakh. Despite the fact that the god is housed in a room and is said to have extraordinary abilities. However, it is only shown to the local people once a year. The temple is decorated with 600-year-old paintings that attract visitors.

The Matho Temple, which is located within the Matho Monastery, is a fascinating destination to visit. The Matho monastery is an important Budha temple in Ladakh, which adds to the value of the Matho Temple. This temple is around 26 kilometres from Leh and is believed to be the location of Lama Dugpa Dorje’s monastery. The temple is said to be 500 years old, yet it has been regularly repaired throughout the years. Every 14th and 15th day of the first month, according to the Tibetan calendar, there is an annual event held here.

Diskit Monastery is the largest and oldest Buddhist religious residence in Nubra Valley, belonging to the Gelugpa division or the yellow hat division of Tibetan Buddhism. In the monastery’s hall, there is a statue of Cho Rinpoche, the crowned Buddha, as well as a giant Buddha seated on a hilltop and facing Pakistan. The ‘Festival of Scapegoat,’ also known as Dosmoche or Desmochhey, is celebrated as the triumph of good over evil. This event is held in the winter when the Khardong Peak is covered in snow, yet the inhabitants of Nubra Valley assemble to see the popular mask dance. It is a dance performed by the monastery’s lamas throughout this festival and it is also known as Cham dance.

Rizong Monastery, located 73 kilometres from Leh, belongs to the Yellow Hat sect (Gelugpa order) of Tibetan Buddhism. Yuma Chanchubling is another name for this monastery. Tsultim Nima built this monastery in 1831 as a home and study centre for 40 monks. One of the remarkable aspects of this monastery is that it has texts written by the first Sras Rinpoche, as well as scriptures, Tsultim Nima’s biography, and so on. A nunnery is located 2 kilometres from the monastery, where the nuns perform activities like spinning wool, milking, and obtaining oil for the temples. There are 20 nuns who live in this nunnery, which is run by the temple.

The Surya Mandir Road in Anantnag is home to the Sun Temple. The temple is devoted to the Sun God and is the only one dedicated to him, which adds to its importance. The skyscraper was constructed with an astounding 84 columns.

People come to Ladakh for the experience, to ride the motorcycles through the high-altitude and difficult roads. However, if you want to experience the union territory as its whole, don’t miss out on the temples in Leh. We have compiled a list of the best temples which you should not miss.

Akshay kumar is a travel enthusiast who loves to visit the most popular as well as offbeat places in the world. She loves to share her travel experiences with fellow travelers.